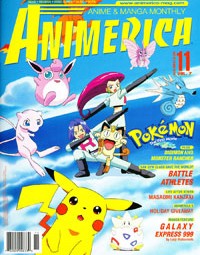 Team Rocket is on the cover promoting the first Pokemon movie. I wanted to feature the article "How To Customize Your Model Kits" I have four model kits that I bought at A-Kon around 2003 that I have yet to build. It just wasn't for me as a hobby.Note to any companies with technology in your name. Don't Do It!. Case in point: the ad for LVD.com - Laser Visions Direct. "The … END_OF_DOCUMENT_TOKEN_TO_BE_REPLACED 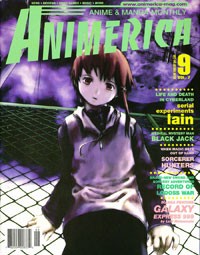 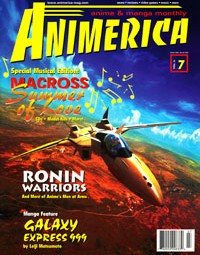 Part II of the Macross "Summer of Love" 15th Anniversary of the series airing in Japan. The second part deals with all the numerous CD soundtracks and the article "Evolution of the Valkyrie" - goes through all the different designs and models from Macross Plus, Macross 7 and Macross II.The other main item I found in this issue is the full introduction of ADV Films modern … END_OF_DOCUMENT_TOKEN_TO_BE_REPLACED 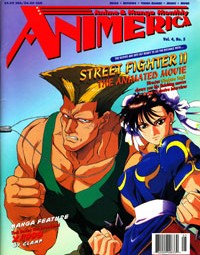 You still see TONS of Street Fighter cosplay at cons - it's on the cover for this issue.The Animessages has some sad news for Sailor Moon. It's reporting another season for syndication is in jeopardy. The article give the address of Bandai America to have fans do a letter writing campaign. That first run was all there was for syndication. Fans would have to wait for 1998 … END_OF_DOCUMENT_TOKEN_TO_BE_REPLACED 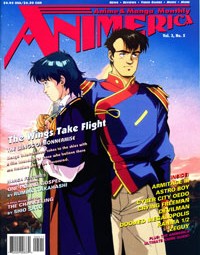 The Wings of Honneamise is the cover for May's Animerica Magazine. My current memory of this movie was Bandai Visual's temporary push into the North American market.I remember watching Cyber City Oedo 808 on a pay movie channel. I can't remember if it was Starz or not. I just remember lots of cursing.VIZ wins the award for "How much stuff can we promote on one page?" … END_OF_DOCUMENT_TOKEN_TO_BE_REPLACED